Apparently, there’s a guy who drives all the way from Montreal to Burlington, Vermont, just to have pizza at a restaurant called American Flatbread (Burlington Hearth). This bit of culinary obsession impressed one of our friends enough that he went to American Flatbread to try out the pizza for himself. Four times. Our friend positively RAVES about it too. So, guess what happened when we decided to go to Burlington?

We put American Flatbread as our destination in Google Maps when we took off from Montreal. Because, seriously, who needs a famous landmark as an endpoint when good pizza awaits [this last sentence was obviously written by Henry]?

So, of course we arrived a bit before it opened. And this was after we’d purposefully skipped breakfast to work up an appetite for the occasion (pro-tip: Do not do so. Ever.). We strolled around the neighbourhood (i.e., Church Street – the town’s downtown area), where we watched many a shop owner setting up for the day. After a good 20 minutes of taking in the local atmosphere, we finally set foot inside American Flatbread.

It was a welcome sight: Upon entering, we saw a big restaurant with tables generously spaced apart. To the left, we saw the large, large wood-fired clay oven used to cook the pizzas, and to the right, we saw the path to the tanks the restaurant used to brew their own beers.

We sat down in a booth and took in the decor and atmosphere. Banners declaring organic everything (tomatoes, wheat, etc.) adorned the walls, and were interspersed with hand-written chalk menus of the pizzas on special. The actual printed menus listed a litany of pizzas and beers, both created on-premises and in Vermont.

Needless to say, we were paralyzed by choice 😛 .

We eventually settled on three pizza choices: The Revolution (organic tomatoes, caramelized onions, mushrooms, cheeses, and herbs), and the two specials – one which had maple-cured bacon, tomatoes, lettuce, garlic aioli, and cheddar, and one which had squash curry, baby arugula, roasted peppers, and goat cheese. The two vegetarian pizzas were combined in half-and-half fashion while the maple-cured pizza had the entire flatbread to itself. A glass of the Conehead IPA was ordered as well: 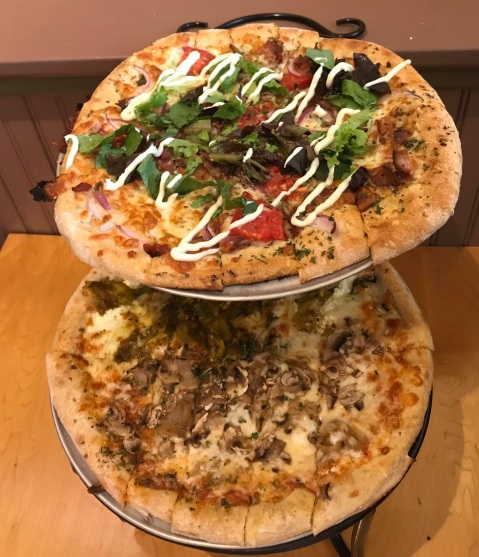 So, what did we think? Well:

Let us tell you why.

The maple bacon tasted more like lardon than the usual bacon, and the maple flavour really, really shined through. It was very crisp, but not to the point where it snapped into a thousand tiny pieces with every bite [Henry had to resist the compulsion to ask the staff where they sourced the bacon…]. The garlic aioli sauce added some serious zest to the mix, and the cheese was flavourful as well. The real surprise [for Henry] was the tomato. The chunks were huge. And! They. Were. Strong. And had a touch of sweetness. There was no missing the tomato. In Montreal, we usually get organic tomatoes, but we’re not sure we’ve ever had it this fresh. Can you say, “Total win?”

The Revolution was melt-in-your mouth good. The onions were soft and sweet, the tomatoes had all their full flavour, and the mushrooms blended  really well with all the ingredients. The pizza was simple and elegant, which is why, we suppose, it had an ostentatious name 🙂 .

The vegetable special pizza was the least memorable of the three. Don’t get us wrong – it was good. Very good, in fact. But it was just overshadowed by the other two. The squash curry (which is something we’d never have thought to put on a pizza in a million years) tasted much closer to Thai green curry than Indian curry. It had presence, but was not unduly overpowering. Similarly, the goat cheese was unmistakably present without being overwhelming. Delicious!

It bears mentioning that the crust for all three were crispy and thin. And the toppings all stayed in place. Not messy pizza, that’s for sure!

Finally, the Conehead IPA, which was recommended by our waiter, was a good one. It was a wheat-hopped beer, and was rather subtle all around. Not too bitter and not too citrus-y. It was good and refreshing after our jaunt around the block in the sunny heat. It went well with all three pizzas, presumably because of its middle-of-the road nature.

So, what’s our final verdict? Well.