Henry: So, you know where we should visit the next time we have a week and the patience to drive 500+ km in five hours? Mariam: No… But I sense you have something in mind. Out with it! I love travel!

Mariam: Well, that was always on my to-go list. Go on ahead and add more reasons for why I should go 😊.

A little while back I decided to scratch visiting Boston, Massachusetts, off my bucket list. I’d heard a lot of great things about the place. Also, being a history buff, I’ve always been curious to check out the Freedom Trail. For those not in the know, Boston is one of the oldest cities in North America, and the Freedom Trail is a tour of some of the most important monuments and sites with historical significance in the US. Beyond that, I checked out Harvard University and a bunch of other cool things – read on to find out what they were!

The Freedom Trail is a 2.5-mile-long stretch that links 16 historically important sites in American history. It stretches along homes, graveyards, churches, monuments, and places that bore witness to massacres. I’m not going to go into detail about all 16 sites – there are other places where you can read up on them. Instead I’ll share with you the places that particularly caught my eye. 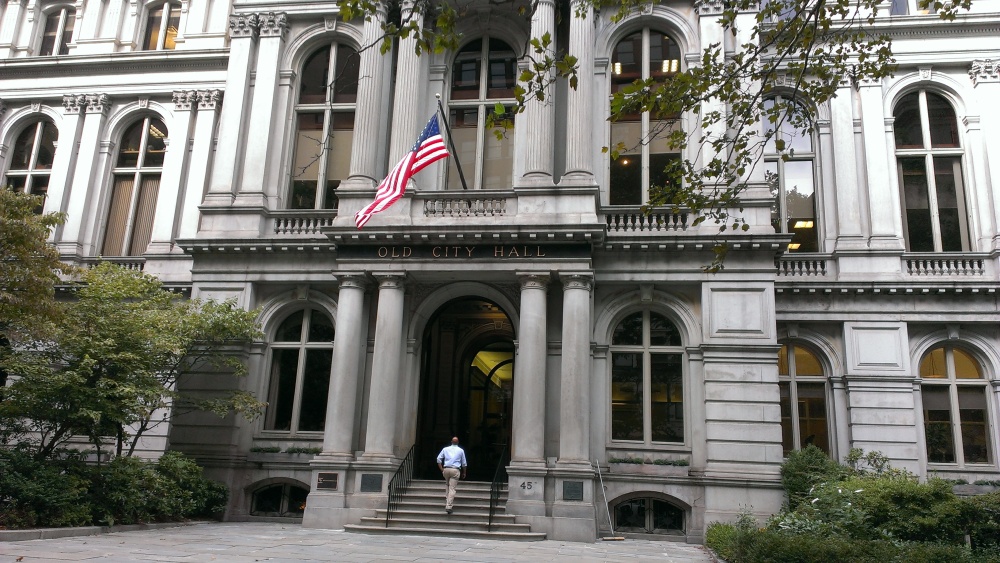 Anything to Do with Paul Revere

The man who most people only know as the guy who rode his horse hard through the night screaming, “The British are coming! The British are coming” has nearly every detail of his life on display on the Freedom Trail. I passed by his church, his statue, and his actual house. All the while, I was getting more information about him. 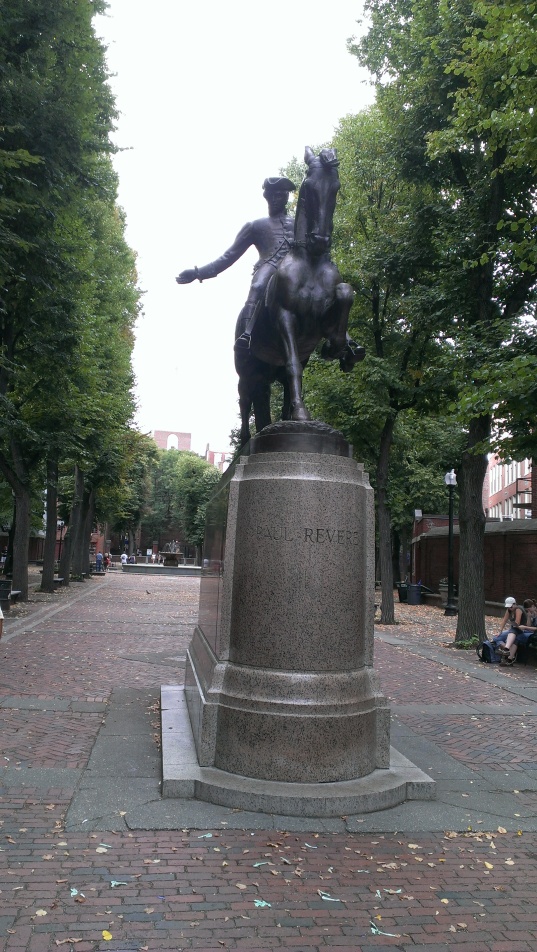 The way to Paul Revere House 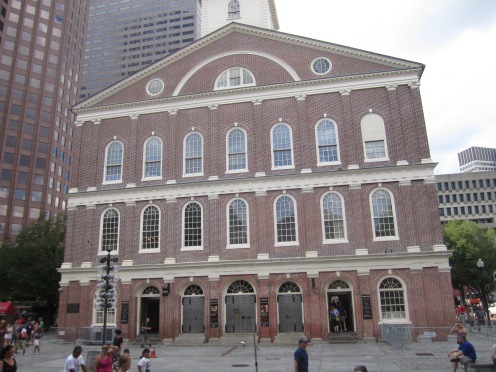 The Cemeteries: Copp’s Hill and The Granary

These are two truly old graveyards. Established hundreds of years ago, these two sites are the final resting places of prominent historical Bostonians. Many tombstones have become ravaged by time and the elements. Walking around, there were grave markers that were broken, tilted, and whose inscriptions were completely sanded away. Although I visited on a bright, sunny day, the graveyards were somber and unnerving. 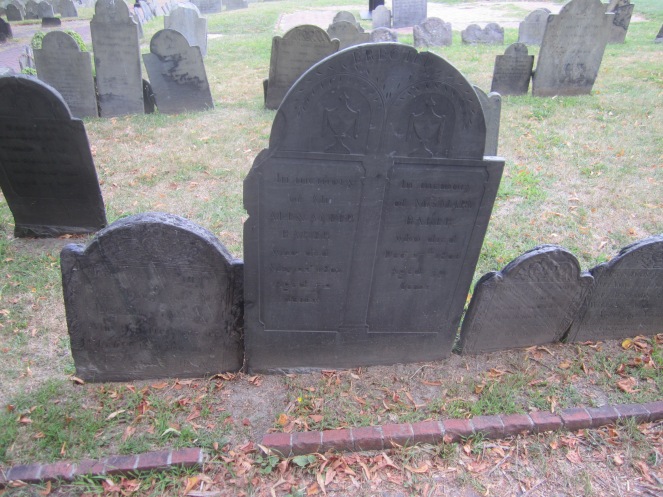 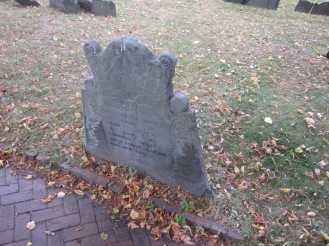 A site where the government fired their guns into the crowd. Controversial, to say the least. It was a grim reminder of how very far away the New Deal was…

You can get more details about the Freedom Trail here. Even if you’re just a casual tourist, I recommend checking out the trail. If you’re fascinated by history, you must walk this trail! [Mariam: Ok… down, boy! 😝 ]

This is where the Boston Tea Party started

Ah, Harvard University. World renowned, and the place from whence giants hail. Of course a visit was necessary. I started my visit there by doing what every student and tourist to the university does: Touch the foot of the statue of the founder, John Harvard. Right after that, I washed my hands immediately since a)everyone else in the world has touched it, and (perhaps more importantly) b)apparently it’s a student tradition to, uh… urinate on that same foot at least once before graduation . [Mariam: Ewwww! What is wrong with people?! And why would you touch the foot if you knew that?] [Henry: Swept along by tradition, ma’am. Swept along by tradition…]

The statue of John Harvard. Note just how worn out his left foot is. 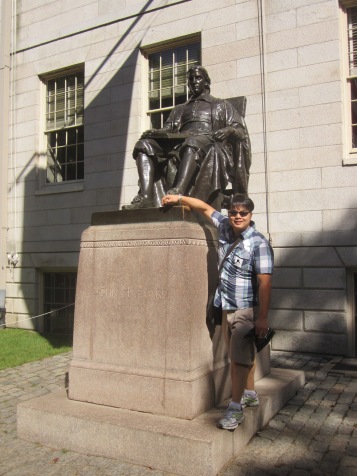 And here’s me touching that foot like every other tourist ever.

Moving along… I walked across the whole of the campus, and took several guided tours. And did I ever learn some interesting doozies. For starters, you remember that John Harvard statue I just mentioned? Apparently, that’s not what the founder looked like. They just sculpted him in likeness of a handsome model. Of course, that’s not even the biggest whopper. Evidently, John Harvard didn’t even found the university! He was just one of the bigger benefactors! Yikes. Talk about branding! 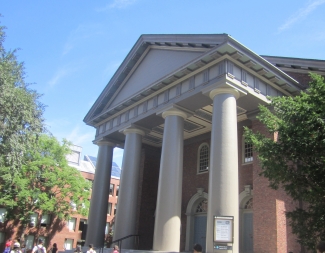 The main Harvard library is miles long underground, and there’s absolutely no getting in unless you’re student, staff, or faculty (so, sorry, but I have no pictures of the interior to show you, only of the outside). 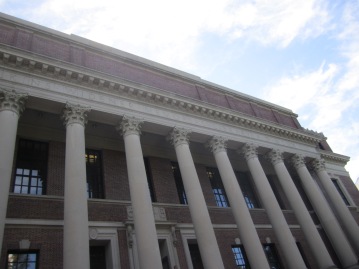 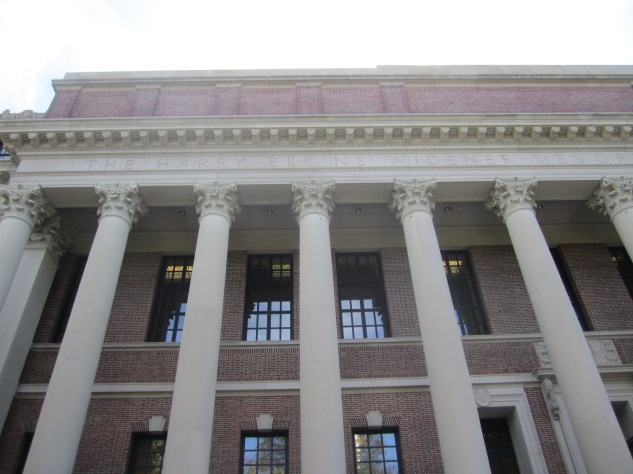 The science building was built off a grant by the then-owner of Polaroid; he tried to be discreet about the donation, but that almost got him in trouble with the IRS since apparently you can’t really hide a $35 million dollar grant back in the 1970s.

Harvard’s two student publications – the Harvard Crimson (a newspaper) and the Harvard Lampoon (a humour publication) are run by people who, in addition to being hardworking students and reporters, also can’t stop epically pranking each other. In one instance, the Crimson’s staff smuggled the Lampoon’s weather vane to the UN and back. In another, the Lampoon’s staff stole the Crimson’s editor-in-chief’s chair and shipped it all across the planet and then back again under cover of night [Mariam: Where the hell do they find the time?!]

Building on the left is the Harvard Lampoon 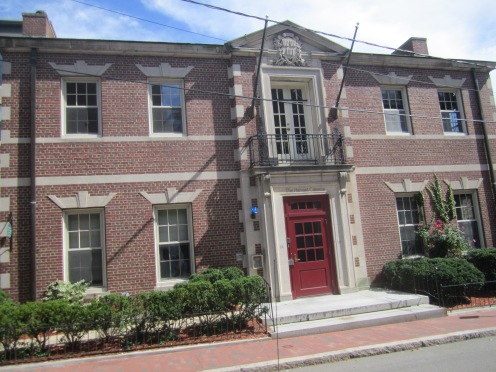 Home of the Harvard Crimson

Other Parts of the City

Ok, this post is already running much longer than I’d planned. So I’m going to do a quick summary of just a few more interesting places and things I checked out:

Wow, this place was huge. Among the things I did was pet a manta ray (tons of people lined up to do it), watch a trained seal do its thing, and check out penguins and squid beaks. It was four hours well spent. 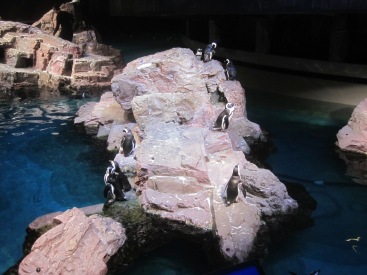 This market is close to 200 years old. It’s home to hundreds of shops and to some damn good clam chowder (clam chowdah!). I hate shopping [Mariam: Yes, yes you do. I don’t think I’ve ever met someone who hates it as much you do], and I still liked this place a lot. If you’re a shopper, I can only imagine the hours you’ll spend here getting lost in it all.

Boston is just packed with great restaurants and cafes. Over five days, I ate out… well, every single meal, and then some. There wasn’t even a thought of cooking my own food. I splurged pretty hardcore, and I was almost never disappointed. Standouts for food though, included the following:

This restaurant was… hipster retro and purposefully garish. The food was tasty, but the real thing that sticks in memory to this day is just how… out there… the decorations were. Recent photos of the place on Google seem to reveal a toning down of the more extreme decorative elements. Still, it leaves an impression…

The Gelateria and Cannoli Factory

So… I have a sweet tooth. And this place makes it veeeery happy. Great gelato and even greater cannoli await you here. I had a boxful almost all to myself…

Seriously. Just do it! 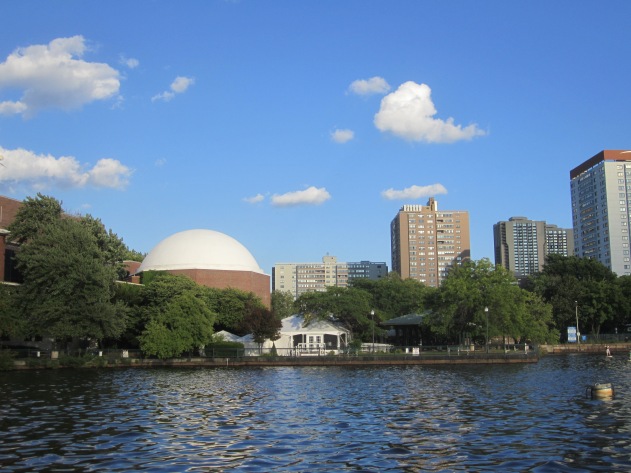 So, Mariam, how’s your interest level now? [Mariam: Even higher than before we started this post!]

How about you, dear readers? Been to Boston? Any suggestions for places to check out if you have? If you haven’t what do you want to see there? Share your thoughts in the comments!