Montreal’s Mile End is one of the smaller neighbourhoods in the city, but does it ever pack a lot of punch to it! Mile End is a total treasure trove of delightful food, fun shops, and breezy artistry. It’s a place where worlds converge or coexist. Different immigrant groups live and make a living here, right alongside artists both world-renowned and amazingly  green. And it’s a totally, totally chill and relaxed place [Mariam: Yep! People here absolutely know how to live!].

Did you know that Arcade Fire and Mordecai Richler were both from Mile End? They absolutely were! And they’re merely the more household names from the neighbourhood; Mile End has a burgeoning music and literary scene well-worth exploring. To say nothing of the food scene…

Let’s begin with Montreal’s two most well-known bagel shops: St-Viateur Bagel and Fairmount Bagel. They’re both right here in Mile End, and have been here forever (forever meaning since 1957 and 1919, respectively). Both shops make thousands of bagels every single day without fail, and lineups are the norm at these two places, and with good reason. [Henry: They make stunningly good Montreal-style bagels. Which is to say, thin bagels with crispy shells and soft, chewy insides. Both places are masters of the form!] [Mariam: So, maybe it’s because I wasn’t born in Montreal, but honestly, what’s the fuss over bagels? They’re like donuts, but without the sugar…] [Henry: Gasp! Sacrilege!]

Outside of bagels, you can also find a variety of other different cuisines here, ranging from Japanese to French, and quite a few other things in between. In fact, off the top of our heads, we can list off Chinese, Greek, Jamaican, Italian, vegan, and pub food as the things that you’ll find in Mile End. Of course, that variety’s to be expected in Montreal – the surprise of it all is that these disparate cooking styles are often times literally right next door to each other! Then again, Mile End’s density basically guarantees it!

And so, it’s often hard to decide which place to eat at in Mile End. What ends up happening is that, on any given trip to this neighbourhood, we hit up multiple places before getting out of here (good thing we run 😛 ). 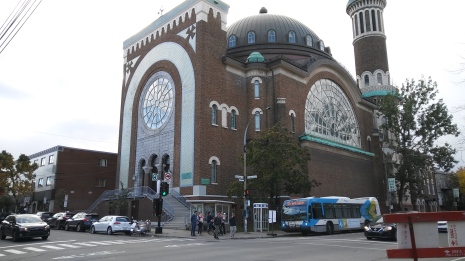 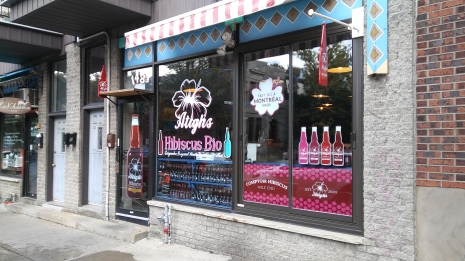 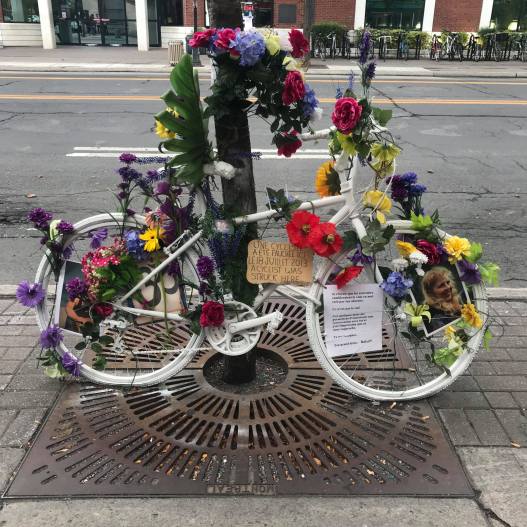 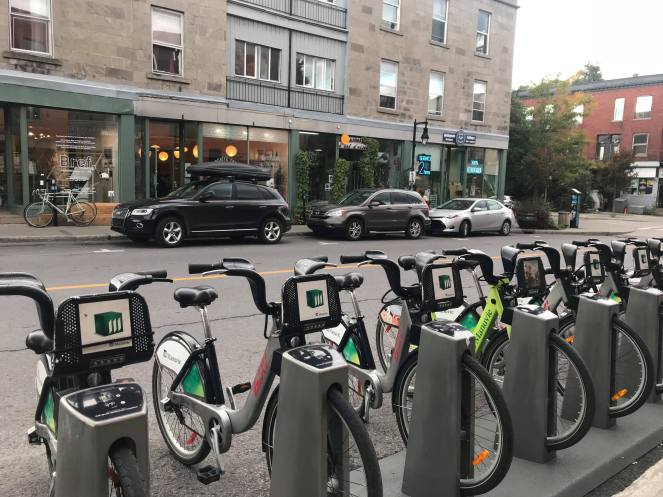 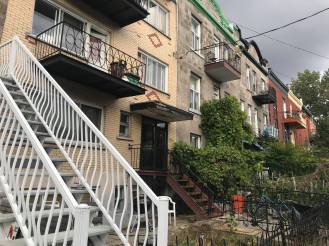 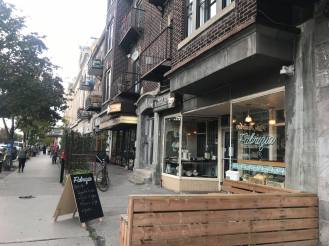 Henriam’s Guide to Things We Like in Mile End

To help you all out, here’s a quick guide of the places we like in Mile End, along with short descriptions of these places and why we like ’em. This is obviously not a comprehensive list of the places in the neighbourhood – just a list of places we find ourselves time and again when we’re out having fun :).

St-Viateur Bagel and Fairmount Bagel: Well, as we’ve stated before, they make great Montreal bagels [Mariam: Correction: Henry said it :P].. There’s always lineups, but honestly, if you like bagels or baked goods in general, the lineup is worth it! Make sure you try St-Viateur’s “All-Dressed” bagel – the thing has basically all toppings sprayed right onto it, and it is great! [Mariam: Well, this one is good, I’ll grant 🙂 ] 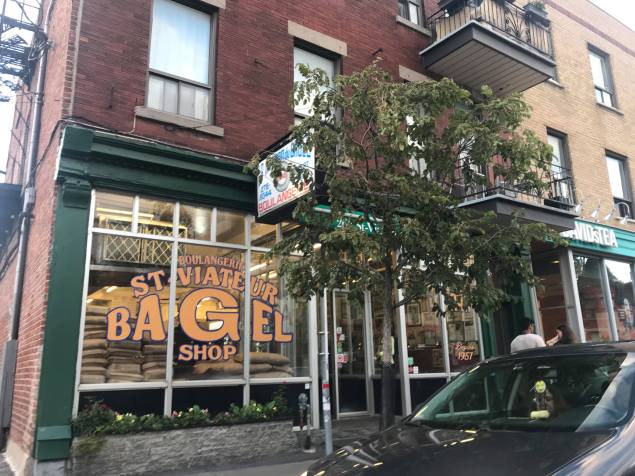 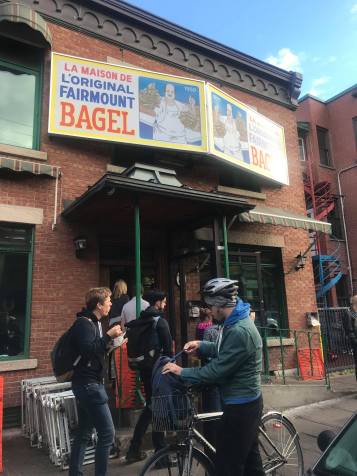 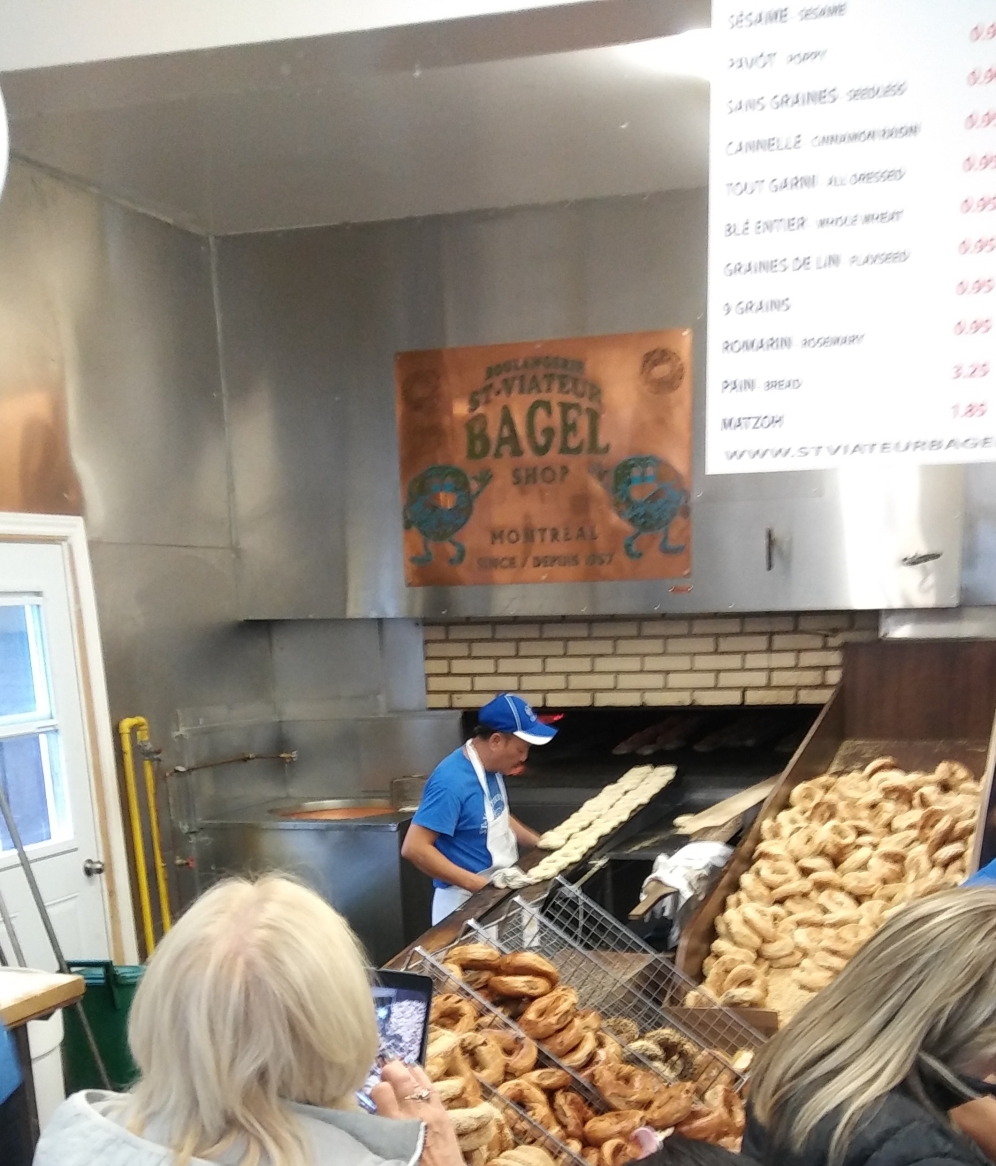 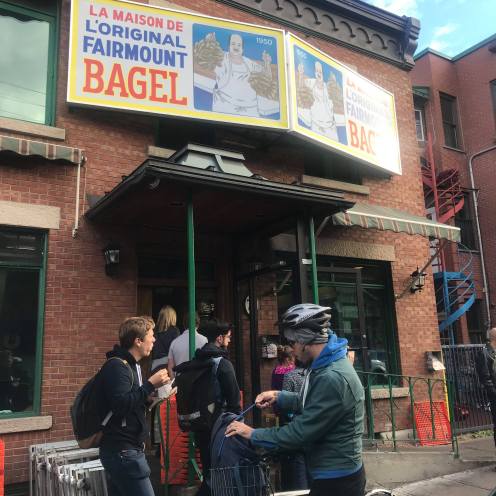 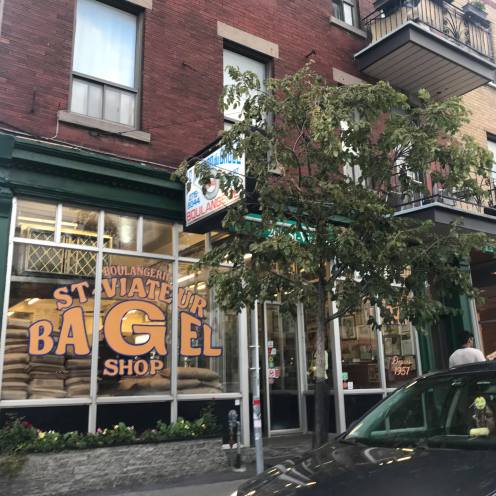 PA du Parc: We love this store. It’s reasonably-priced, well-stocked, and carries a LOT of organic food. We come here often to do groceries, even though it’s out of the way for us.

Oishi Sushi: It doesn’t look it from the outside, but this restaurant looks and feels high-class all the way. Great décor, stylish seats and tables, and atmospheric lighting all complement some really good sushi.

Dieu du Ciel: This microbrewery makes some of Henry’s favourite beers. [Henry: Seriously – the Péché Mortel is just divine.] All their beers are good, and you can find them sold in a number of stores. But going here to drink it fresh is still the definitive experience with the beer. Just a tip though – if you want to be able to talk without shouting, then hit it up on non-weekend nights. There’ll still be people, but it won’t be loud and jumping. Of course, if loud and raucous is what you’re going for though, then hey! Weekends at Dieu du Ciel are loud, good beer fun :).

Sparrow: As a pub, it’s good. As a breakfast place, it’s great :). Their brunch menu is simple and unassuming, and their cooks prep it all pretty damn well.

The Rialto Theatre: This grand old theatre is home to Montreal’s annual Rocky Horror Picture Show event, where fans dress up, simulate lewd acts for prizes (we kid you not), and play along with the crazy rituals that have sprung up around this cult classic movie. The Rialto is also where many and varied dance and other types of performances take place. It’s a place that calls out to us often. 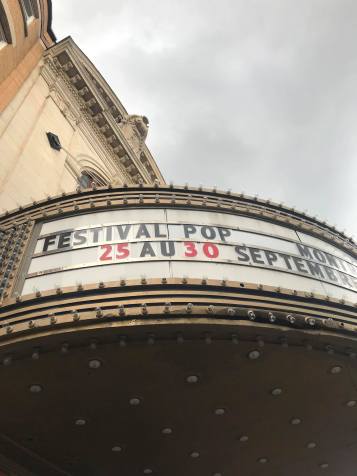 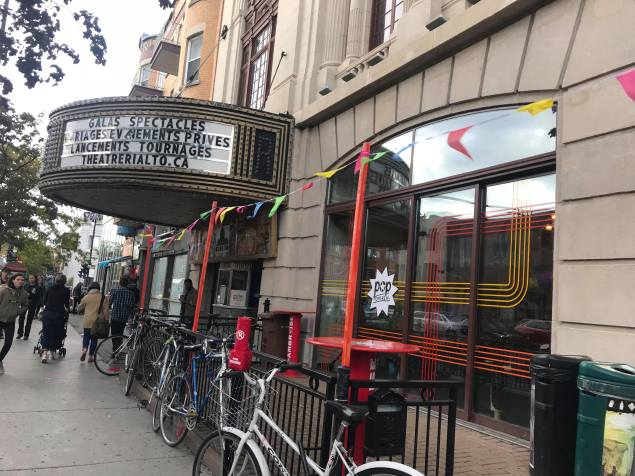 Caffe In Gamba: Home to some good coffees, and never too loud nor too quiet, it’s a great little place to hang out or study. [Henry: I have spent countless hours here poring through textbooks and writing tons of papers. In Gamba is pretty conducive to that kind of thing…]

Café Olimpico: [Mariam: This place has excellent, excellent coffee. Every relative and friend of mine who knows coffee can’t stop raving about it] [Henry: I don’t know. I mean, I like the place and think it’s good, but that good?] [Mariam: Well, that settles it then, Henry. You don’t know coffee 😛 .] [Henry: Heeeeeyyyy…] 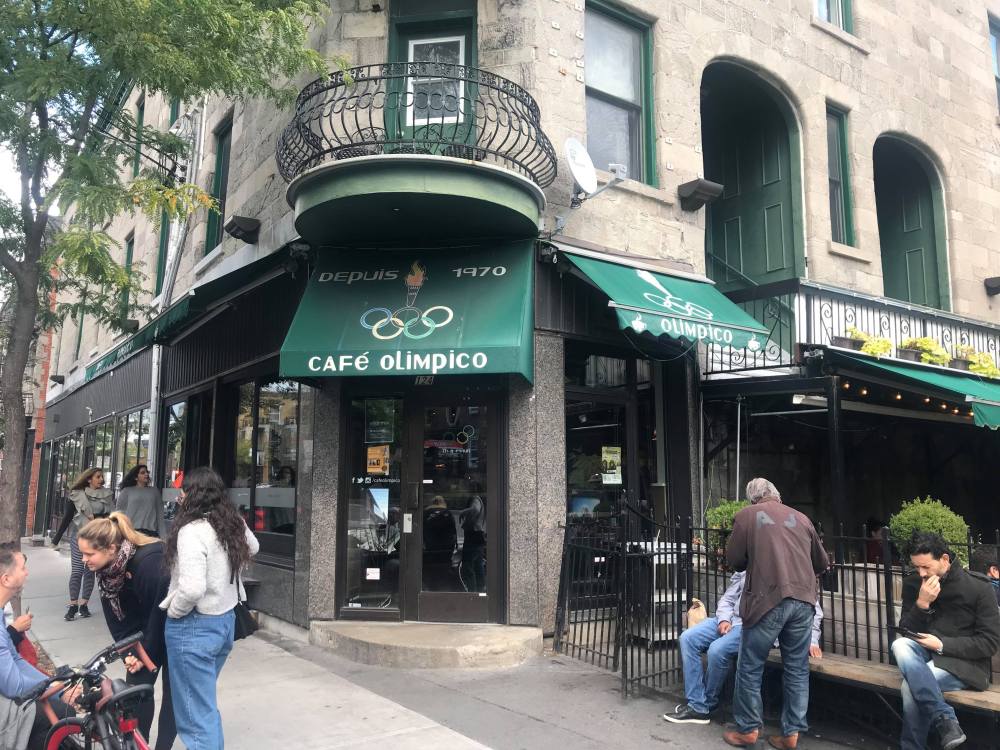 Le Depanneur Café: [Mariam: There’s one café here that just about totally sums up what I like about Mile End: Le Depanneur Café. This café features an endless procession of live music performed by local musicians. It’s a very, very relaxing café in which to sit and read or just enjoy the live music. It’s also a bed and breakfast for weary travellers, and apparently is a place that gives money to help struggling artists. The cafe is a very good snapshot of all the things that make Mile End a famous neighbourhood.] 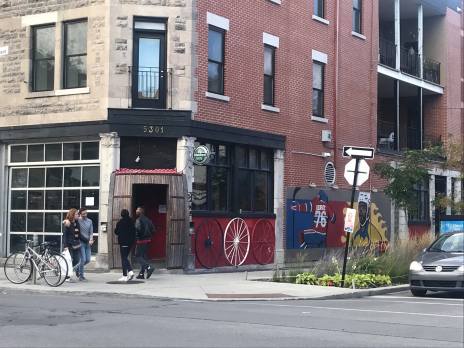 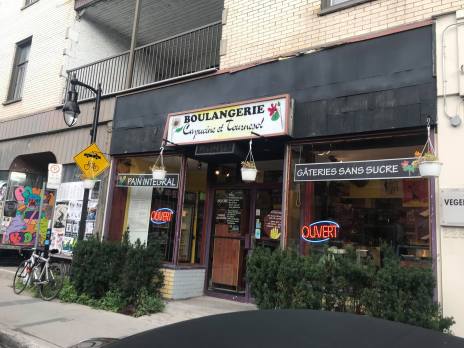 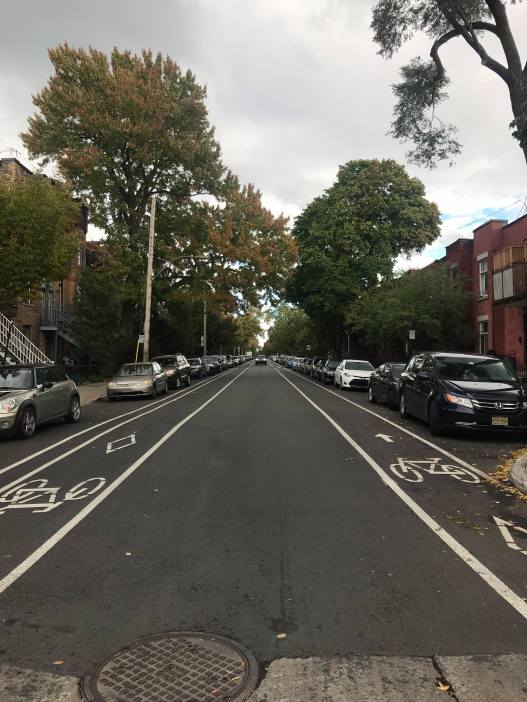 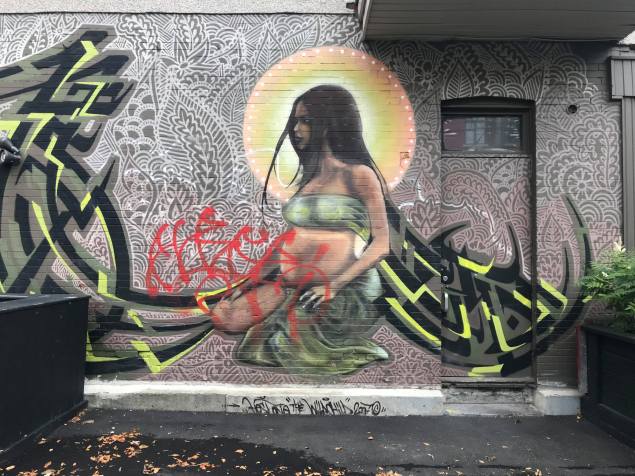 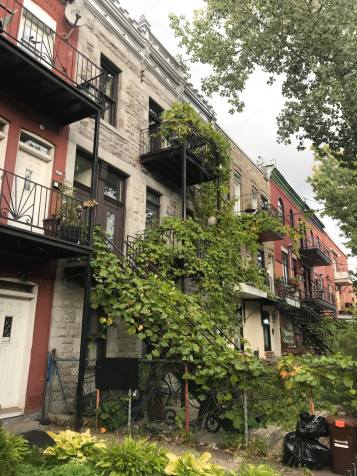 That’s it for this time! What are your favourite places in Mile End? Alternately, what discoveries have you made in this neighbourhood? Let us know in the comments!

Where to Find Our Favourite Places in Mile End