We have a serious soft spot for Japanese food and culture – it’s why we recommend Tokyo as a spring break destination. It’s also why we try a lot of Japanese restaurants in Montreal. Gyu-Kaku is one of the more recent happy discoveries that Henry made, and one which he can’t wait to share with Mariam [Mariam: You ate Japanese food without me?! 😭] [Henry: Don’t worry; we’ll go soon, I promise!] [Mariam: We’d better!😤]

So, where to start? Ah, yes: At Gyu-Kaku, you cook the food on a grill that’s directly installed at your table 😀. Even if you’re not a fan of prepping food, watching food sizzle right in front of you is a great experience you should try at least once. And if you love to cook, like we do, it’s just amazing good fun!

Don’t believe me? Well, just check this out:

There is something positively magical about watching tongues of flame dancing about in a grill. [Mariam: Hm. Should I be worried about any pyromaniac tendencies you may have, dear?] [Henry: No, no – I only love fire as it relates to cooking!]

Of course, all the grilling in the world wouldn’t matter much if the ingredients weren’t up to par, right? Fortunately, Gyu-Kaku’s ingredients are seasoned in a way that I can only call “fantastic”. Almost surprisingly so, in fact.

We’ve both been to a number of other places whose draw is to let customers prep their own food. However, since many of those have been buffets, the ingredients were always largely just fresh as opposed to both fresh and properly seasoned. We’ve grown used to that. So, since Gyu-Kaku is not a buffet, they can afford to take the time and care to really bring out the flavours in their ingredients, and does it ever show!

Since I was part of a table of seven, we decided to order the Shogun special – a fixed price bbq menu that included the following:

The entrees were decent overall, with the only real standout being the bibimbap (for the uninitiated, that’s a very hot stone bowl full of rice and mixed goodies that you mix together. Because of the heat of the bowl, the food gets further cooked, and if you’ve done it right, the rice comes out super crispy. We did it right, I’m happy to say.

Moving on to the mains, I have to say that there was not even one cut of meat or seafood that wasn’t well, well seasoned. The shrimp was nice and delicate, and the seasoning was subtle:

The various cuts of steak had much more pronounced flavours than the shrimp. And they were all exquisitely tender! 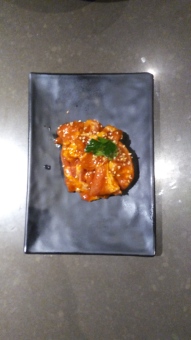 Putting them on the grill was a delight, and just commenting on the cooking process enhanced the night’s already-memorable conversations.

And here was the ingredient that was the absolute piece de resistance for me – the marinated chicken:

As with all the other ingredients, I started by just grilling a few chunks of the chicken to test it out, The test piece turned out so perfectly well that I just spent the next few minutes doing nothing but grilling the rest of the chicken. Without realising it, I completely stopped contributing to the dinner conversation with the others at my table as I was cooking it. I was on a mission. [Mariam: I’m, uh, just going to roll my eyes right about here, ok?] [Henry: Well, the others all loved it too, and were very understanding of my focus, and really, really devoured the rest of the chicken the second it was ready!]

And when all the food was done (because believe me, we finished it all – not a single grain of rice went to waste), there was still ice cream for dessert. 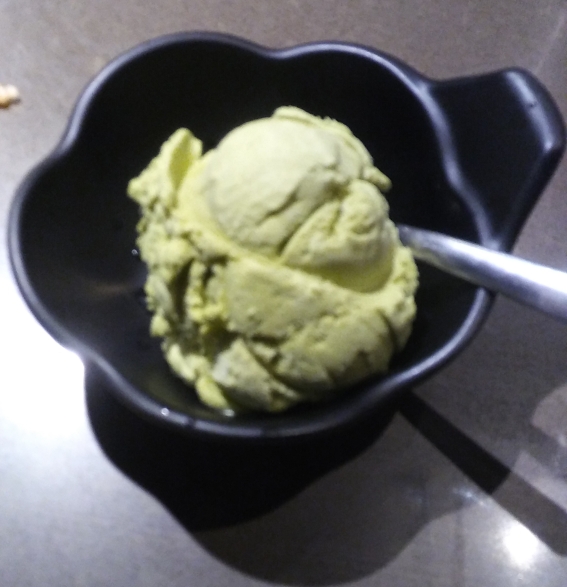 Overall, the dining experience was great – the flavours were splendid, and the cooking was just a lot of good ol’ fun. The time it took to cook the food also allowed for great conversations to flow constantly – it’s a great place for a large group of people to eat and unwind for a couple of hours at a shot. 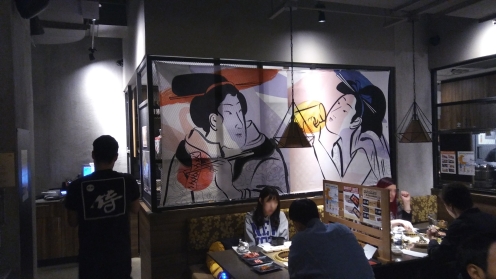 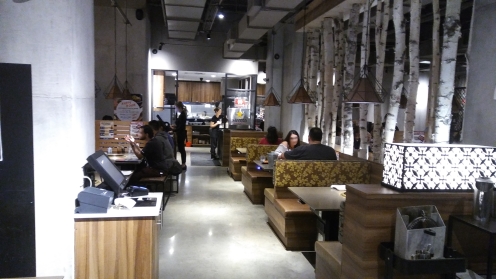 Just one caveat: Don’t go in expecting this to be a buffet experience. As I’ve said above, Gyu-Kaku is not all-you-can-eat. If you’re going in with that attitude, I guarantee you’ll be disappointed. You’re not coming here for great quantities to be inhaled – At Gyu-Kaku, you’re coming for great flavours savoured over time 🙂 .