Hello friends! Been a while, and boy have we missed this little blog. So, first of all: A reeeeeeally belated Happy New Year to one and all!

We’ve been busy with a lot of things, but we’ve still been exploring Montreal (and elsewhere), but we couldn’t think of a better place to restart blogging than at Maison Christian Faure. 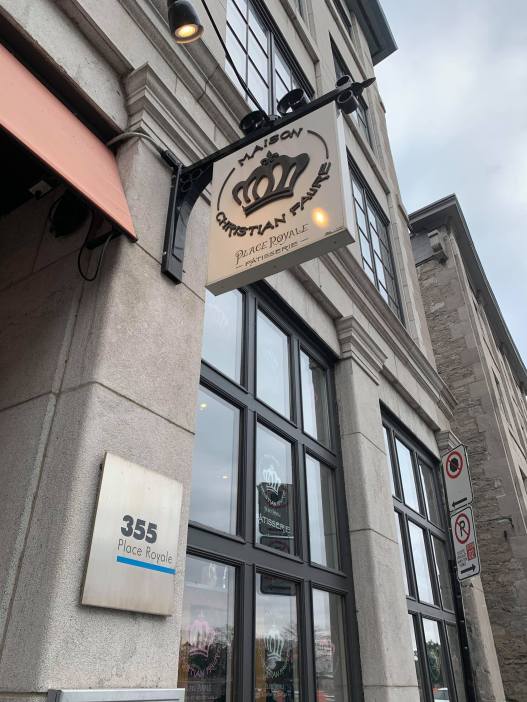 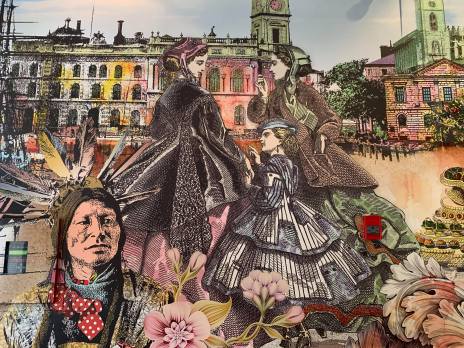 [Henry: First, a bit of context – Maison Christian Faure is one of three pastry places in Montreal opened by an extremely accomplished pastry chef, the eponymous Christian Faure. Just how accomplished is this man? Well. Among the man’s accomplishments are the continual winning of prestigious pastry-making competitions starting in his youth, culminating in his being awarded the Meilleur Ouvrier de France for pastry in 1994 (imagine winning a Nobel Prize for making pastry. It’s not quite that high-level, but it’s pretty close!). And after that accomplishment, he’s been named Best Pastry Chef in the World by the American Hospitality and Sciences academy. So, it’s safe to say his pastries should be good.]

We regularly come here for the pastries, and now and again we come for brunch. That way, we get the joy of a good breakfast and the chance to indulge in world-class pastries. And we’ll be describing one such trip today!

Last time we went, we ordered the “brunch on the plank” and the “thin tomato tart”. Both were excellent.

“Brunch on the plank” is an odd little name for eggs benedict with ham on a brioche (with french toast on the side), but, honestly, what’s in a name anyway when the dish is so tasty? The brioche was light and crispy on the outside, and subtly rich in its texture. There was a choux pastry served with the egg that was light and puffy. [Henry: The mix of the egg and ham and brioche made my mouth water with every bite, and the French toast was close to the best I’d ever had!]

The thin tomato tart was a pretty, pretty dish. Colourful and inviting, it looked like the elegant cross between a pan pizza and a fresh healthy salad. What’s interesting about this is that the crust was croissant dough. No single ingredient in this dish was overpowering on its own, and they all blended together pretty effortlessly to make for a subtle mix. [Mariam: It’d be really nice if actual pizza places started using croissant dough for their crusts – this was the real standout part of the tart!] 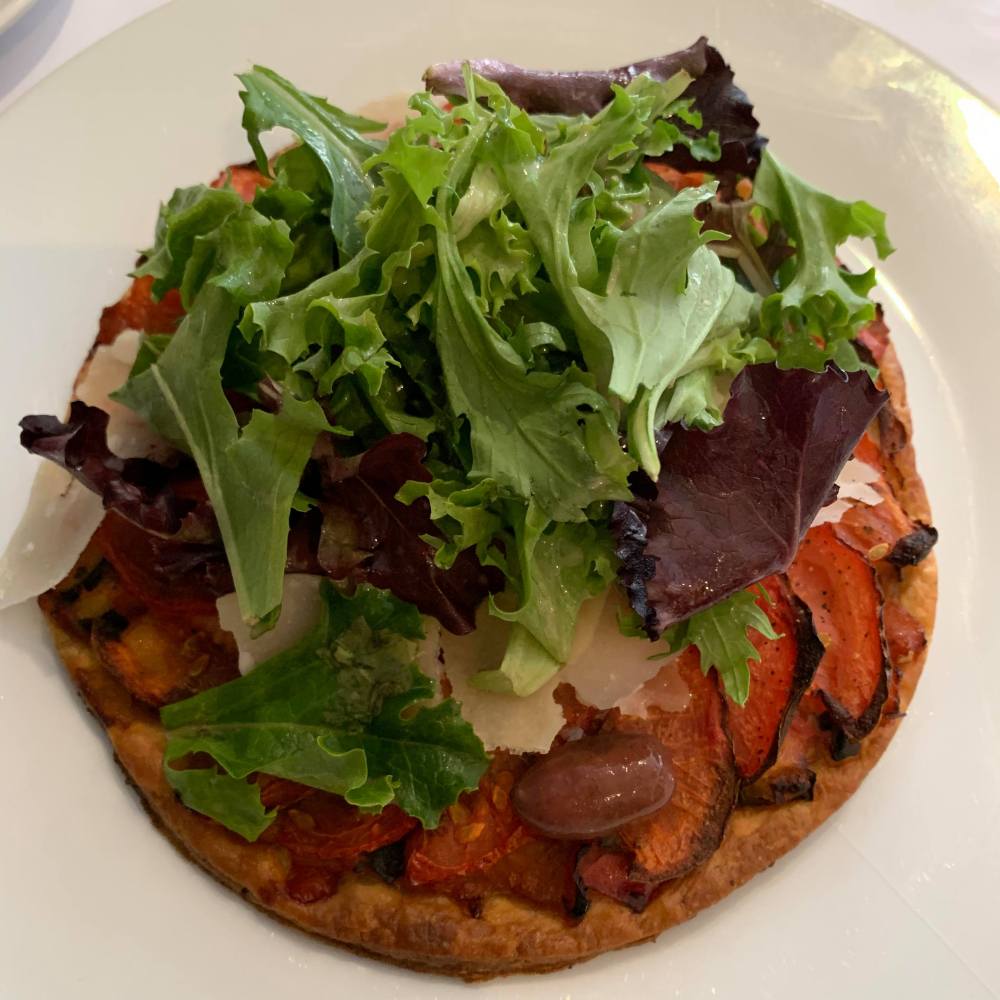 We also had a couple of their delectable pastries. Henry ordered the apricot mille feuille, and Mariam ordered chocolate macaroons. The apricot mille feuille was thicker and heavier than expected. It tasted rich, and oddly enough, it felt light. The macaroons on the other hand, were very light, both in presentation and in mouth feel. It was like a crispy and gently shell surrounding a sweet, porous center. Both were luxurious.

Maison Christian Faure has an interesting atmosphere. First, the pastries at the counter are constantly tempting. It’s always a struggle to not spend your monthly salary in one go here (more for Henry than for Mariam – she has discipline  😛 )

Beyond that, the atmosphere in this place includes some interesting artistic choices. When you first come in, you’re confronted with a mural made of artwork that’s evocative of old-timey newspaper illustrations, down to colouring that appears crude and hand-applied. The restaurant’s table and chairs feel like an interesting mix of utilitarian and higher end furnishings. Overall, it’s comfortable and cozy.

And if you’re willing to explore Maison Christian Faure a bit, you’ll discover that there’s a pastry school here too! Given how tasty the pastries and food here is, we seriously wonder if we shouldn’t try getting into the program :P. 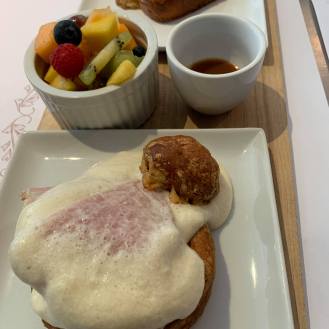 We love coming here. It’s great for a brunch date, or just to relax to a good cup of coffee and an exquisite piece of pastry – both good reasons for why it’s become one of our favourite places! If you love pastry (and who doesn’t?), you should definitely give this place a try! 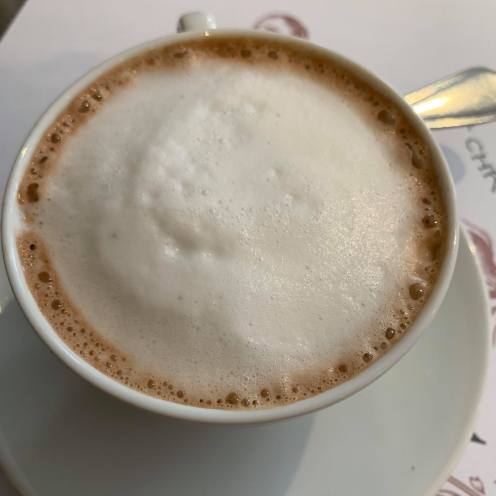 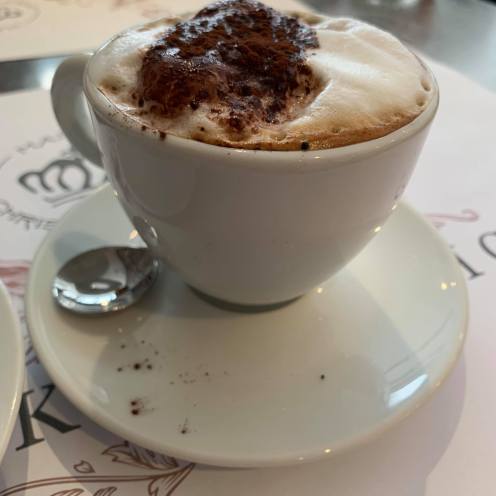