Time for one final post from Portland (and then we get back to talking about awesome stuff in other places). This last one is about the Highroller Lobster Co., a neat foodcart-turned-diner with a decidedly different atmosphere. It was a great way for us to cap off our visit 🙂 .

So, what made this place interesting? Well, for starters, you order your food right in front, after which you’re given a little flag with a number on it. You take this flag with you to a table (or booth) of your choosing, and then you sit and wait for your food to arrive.

Neon lobster – that could be the name of an 80s band 😛

However, by far the most interesting sight is the skeleton dressed in casual clothes, sitting by itself at one of the center tables. 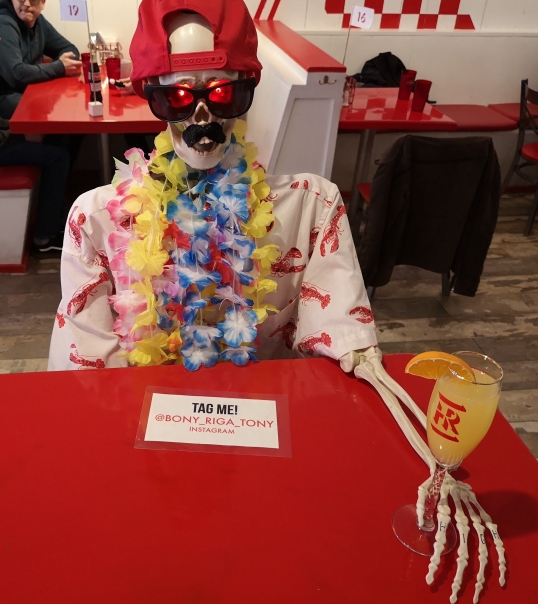 His name’s Bony Riga Tony, and we dare you not to laugh when you see him

As befitting a diner, the wait for the food was pretty short. The waitress found our flag (good ol’ Number 16) and dropped off our order: A crab roll and a lobster roll. Lordy, both were good, good, good 🙂 .

So, let’s start with why we liked the crab roll. The obvious first thing was the fact that the crab was super fresh. Beyond that, the seasoning was actually much more pronounced than in the other places we’d eaten during our time in Portland. It wasn’t overpowering, to be sure, but the marinade (or whatever it was they put in the crab) and tartness stood out more than we were expecting, and they were a very happy surprise. The flaky crab was tender and melt-in-your-mouth good. Beyond that, the bread roll was super soft and close to moist as well – it was almost less bread and more cake, which is never a bad thing 😀 .

Did we mention that there’s a huge list of sauces from which to choose? There are! Sauces include lime mayo, jalapeno mayo, charred pineapple mayo, garlic mayo (ok, there’s a lot of mayo 😛 ), curried ketchup, honey dijonaisse, sweet/hot relish, lobster ghee, and drawn butter.

Given our love of many, many different flavours, we tried to get sauces with different flavour profiles. That’s why we ordered curried ketchup, garlic mayo, charred pineapple mayo, and drawn butter (ok, so that last one is just more that we’re ever so slightly addicted to butter 😛 ). They were all good, especially the curried ketchup. We were, however, mildly disappointed that there wasn’t more pineapple in the pineapple mayo. Still, that’s a very minor criticism; we could both eat all four sauces all the time!

Moving on the lobster roll: Oh wow. The lobster in the roll came in huge chunks (as you can see from the pictures). Just like the crab, the lobster was super fresh, and the meat was both tender and springy. The sauce formed the lobster salad was really rich (but of course, we made it richer by pouring the drawn butter right on it…). Every bite of this roll was just exquisite, and we found ourselves wanting more even after it was all done [Henry: I came reeeeeeeeeeeeeal close to ordering a second one!] [Mariam: And boy, did I ever have to stop you!]

The sides were just as rich and comforting (which is the point, we guess of comfort food 😛 ]. As with everything else, the cole slaw was good and fresh (along with also being crunchy and tart and sweet). The potato salad was more subtle and subdued in its flavouring, but did it ever feel dense and filling. Top grades all around!

Overall, the food was great. We pretty much finished everything, including all the sauces (that’s always a good sign the food is good, yes? 😉 ). 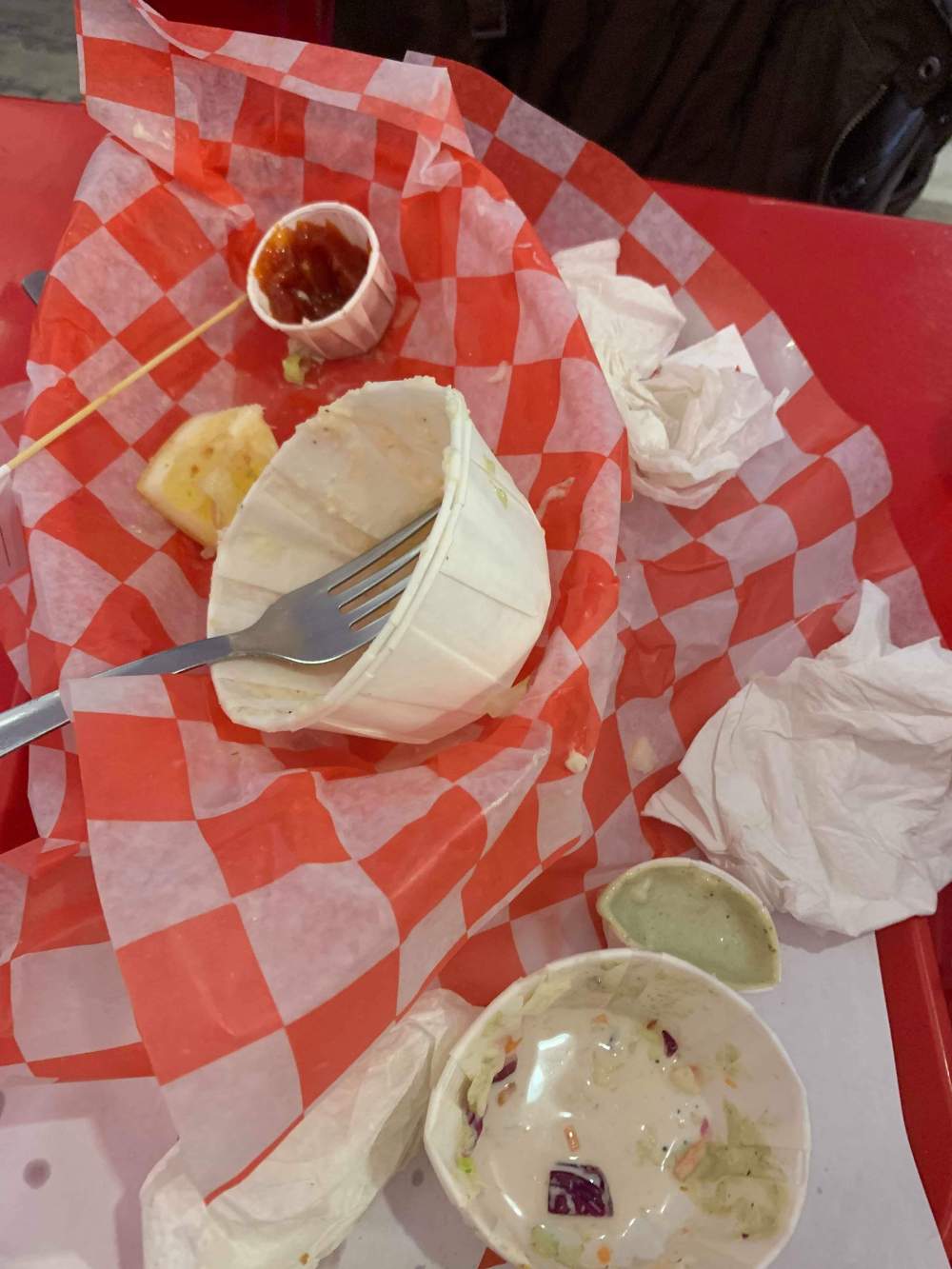